1913 - 1992
Elizabeth David is well-known as an influential cookery writer. She was born Elizabeth Gwynne at Wootton Manor, near Polegate. Her father, Rupert Gwynne was Conservative MP for Eastbourne (1911 – 1924), she was rebellious and restless. She defied conventions and in 1939 travelled across Europe with a married lover. As World War 2 broke out, they had to flee the advancing German army. After the war and back in England, she started publishing magazine articles and books. These introduced readers to a world of food and eating so different to that experienced during the recent wartime austerity.

Elizabeth David was born Elizabeth Gwynne at Wootton Manor, near Polegate and christened at St Peter’s, Folkington.  Her father Rupert Gwynne was Conservative MP for Eastbourne (1911 – 1924) and her mother Stella Ridley was the daughter of Viscount Ridley. Initially, Elizabeth and her three sisters were educated at home, but when their father died suddenly in 1924, the two oldest (Priscilla and Elizabeth) were sent away to boarding school although both possibly spent a short time in Eastbourne schools. A younger sister went to Moira House. At 16, Elizabeth’s mother arranged for her to live in Paris with a French family and to study French language, literature and history at the Sorbonne. After eighteen months in Paris, Elizabeth’s mother sent her to Munich to learn German and to continue painting studies, living with an aristocratic German family. 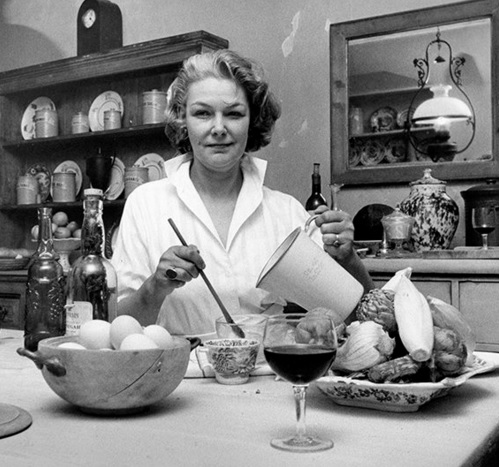 Personal History 1932 – 1946
Elizabeth returned to England and started to teach herself to cook. Until then she had always lived in houses with servants but now was fending for herself while trying to become an actress. She joined the Oxford Repertory Company and later the Regents Park Open Air Theatre and had small parts in a number of productions. She met Charles Gibson Cowan, a married actor, writer and pickpocket , and together they bought a boat and set sail in July 1939 heading for Greece. They were in Marseilles when war broke out and had to spend that winter in Antibes on the French Riviera. There, Elizabeth met Norman Douglas, a writer and traveller. He was much older than Elizabeth but they became unlikely friends and he greatly influenced her subsequent career as a writer.

In May 1940, as the Germans were invading Holland and Belgium, Elizabeth and Cowan secretly left France to continue their journey east. However the war caught up with them while they were passing Sicily through the Straits of Messina. Italy had declared war and Elizabeth and Cowan were interned for a while, their boat impounded and they lost most of their possessions. Eventually, they were released and made their way by train to Athens. They were penniless and Elizabeth hated Athens. They moved to the Greek island of Syros where they lived in a dilapidated house with few amenities. Elizabeth learnt to cook using the simple basic foods of the Mediterranean. Yet again, the pair had to flee as Germany invaded Greece: a dangerous trip by sea, first to Crete, which was bombed, and then to Cairo. Elizabeth and Cowan agreed that their romance was over . Elizabeth spent the rest of the war in Egypt, working from 1942 to 1945 in the library at the Ministry of Information.

In August 1944, Elizabeth married Lieutenant-Colonel Anthony David, an officer in the Indian army. After the war, she reluctantly moved to New Delhi with her husband. She did not like India and was bored, and when she fell ill, returned at last to England in August 1946.

Post war
Post war Britain was a shock for Elizabeth. Rationing was still in place and meals were monotonous and uninspiring, even ‘disgusting’. In Europe, Elizabeth had been cooking simple but flavoursome meals using the basic Mediterranean foodstuffs and had made notes of recipes wherever she went. She now tried to re-create the dishes she had enjoyed on her travels. When her husband returned from India in 1947, they moved to a house in Chelsea in which Elizabeth lived for the rest of her life.

Elizabeth was introduced by a friend to the editor of Harper’s Bazaar, a quality magazine comparable to Vogue, and was asked to contribute an article. The first piece of 1000 words was published in March 1949, entitled ‘Rice again’. It was a success and she continued as the cookery columnist for six years. Her articles showed her experience and knowledge of the Mediterranean foods she was describing. There were historical and literary references too. She had definite opinions about how to cook and serve the meals. However there was still rationing and shortages, and many of the ingredients she described – courgettes, green and red peppers, aubergines, olive oil, olives, anchovies, fresh pasta, pitta, almonds, raisins and garlic – were unobtainable in post-war Britain. Elizabeth hung on to the copyrights to her articles and so was able to incorporate them into A Book of Mediterranean Food published in 1950. This was well-reviewed and a success.

Elizabeth was commissioned to write about French cooking and published French Country Cooking in 1951. She went on an extensive research trip to Italy before completing Italian Food in 1954. Summer Cooking in 1955 included recipes from a wider geographical area including Britain, followed by French Provincial Cooking in1960. She continued to write for magazines and newspapers including Vogue, Sunday Times and The Spectator.

Elizabeth is widely credited as one of the greatest post-war writers of food and cookery, influencing both contemporaries and later generations of chefs and cooks. She occupies a place somewhere between the gastronomic literature of earlier professional chefs and the cookbooks designed for domestic use. Professional chefs were generally male, such as Alexis Soyer who was a French celebrity chef in Victorian England. The books for domestic use, such as Mrs Beeton, were usually written by women. I hazard the opinion that this gender difference between professional and domestic cooking often persists today.

I have tried to find out if Elizabeth has influenced today’s cooks and asked my family, friends and acquaintances if they knew of her and her recipes. Some had never heard of her. Others, including some retired domestic science teachers, knew her name, but did not have her books or knowingly use her recipes. My late mother taught domestic science during the 1960s – 1970s and again did not have any Elizabeth David books, but she did have a couple of Robert Carrier’s. Another relative, a keen cook, has a well-used paperback edition of Summer Cooking, which falls open at the jam chapter.

In conclusion, Elizabeth David is widely regarded as one of the most important and influential post war cookery writers, who introduced the joys and flavours of the Mediterranean to a jaded British public still suffering from rationing. She went beyond the purely domestic cookbook, written by women for women, and produced literary works, previously the preserve of professional male chefs. She praised simplicity and the quality of ingredients, and emphasised the use of seasonal foods. She was ahead of her time when she turned her attention to cookery at home and showed that there was an important English tradition to be rediscovered. 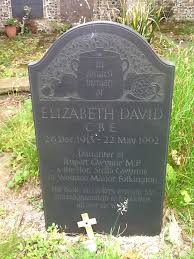 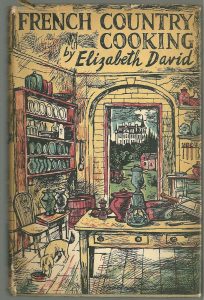 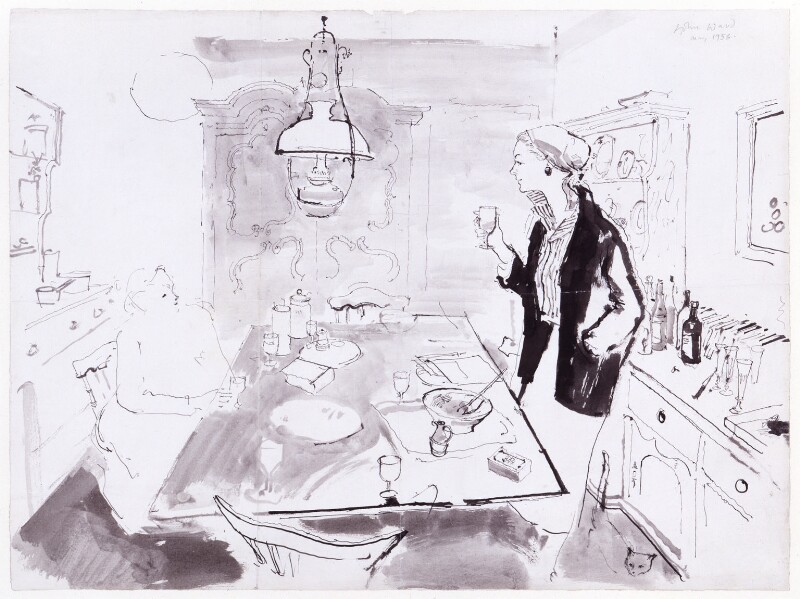 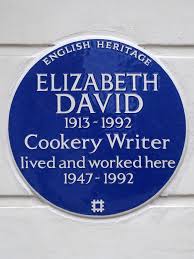